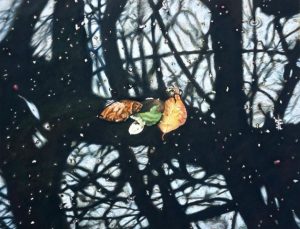 Steve Baker is a Norwich-based artist and writer.  He is a member of the Norwich 20 Group and of the national Land2 research network.  Much of his photographic practice engages with the distinctive character and beauty of Norfolk’s woodlands and wetlands, and (as in his current Wall series) with the depletion of the rural environment for urban development.

In 2017 he and Mike Dodd worked on the two-person exhibition and book Trees and Other Objects, and in 2019 they worked on a collaborative installation for the group exhibition Cley 19: Borderlines.  That year Steve also contributed to Radical Landscapes: Innovation in Landscape and Language Art, curated by Camilla Nelson.  This year, along with both Alex Egan and Mike, he was one of the fifty artists included in Trees and the Sacred, a widely admired group exhibition in the Hostry at Norwich Cathedral.

Mike Dodd is based near Cromer in Norfolk after living in southern France for nearly 20 years. He has an MA in Fine Art, is a member of NCAS and has exhibited as a guest of the Arborealists in France, Somerset and Norwich. In 2017 he completed a two-month residency at the National Trust Scotland property of Inverewe, Wester Ross, which focused on the wide variety of trees on the estate. His work has included large-scale ephemeral installations using natural materials and finely detailed drawings of trees using skills developed in his earlier career as an illustrator.

Alex Egan is based in Norfolk, she studied at Bristol and has a BA (Hons) Degree in Fine Art, she since has exhibited extensively throughout the country. Egan is a part of The Arborealists; an artist collective passionate about trees and the ways in which they can be creatively documented and displayed- Alex’s trees take on detailed realism but with a soft and delicate nature which introduces ethereal qualities. She also is the Tree artist in residence at Somerleyton.

Her recent paintings have evolved in the last couple of years into a layering using direct observational studies of the flora and fauna in her immediate surroundings, focussing on the small intimate and overlooked and layering amongst this elements and visions from her subconscious, influences from the world at large.